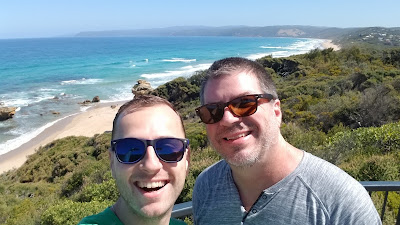 After Sydney Mardi Gras, we decided to do what appears to be a rarity in Australia... we rented a car and drove from Sydney to Melbourne.  Locals universally thought we were crazy (turns out most seem to simply fly back and forth between the two cities), but it really was a beautiful 9-hour drive reminiscent of the rolling coastal hills of California.


We started out our trip first thing the next morning and drove out of Melbourne and onto the Great Ocean Road.  The first leg had us cruising along gorgeous inland and coastal routes, where we stopped a few times along the way.

We ended up renting a farm house for the night, which was by far one of the top highlights of this trip.  It was a 5 bedroom farm house out in the middle of nowhere, yet still close to the main road, and it was from here that we were able to enjoy a gorgeous sunset on the veranda, listening to the evening call of a wide variety of birds and wildlife along the way.  We were even fortunate to spot a resident koala in the eucalyptus tree nearby, and after a night of sleep and stargazing, woke up to find the nearby valley covered in a thick mist, and two more koalas on another tree nearby (these two were mother and baby).

Day 1 of our adventure on the Great Ocean Road, where we drove through the Great Otway National Park and ended up at this huge country home for the night, nestled amongst eucalyptus trees with their very own resident 🐨 koalas! #gaytravel #gayaustralia pic.twitter.com/UcWMjIHSGr
— Matt Skallerud 🔆 (@MattSkal) March 7, 2018


On day 2, we drove through thick rain forest, southern Australia style.  On this portion of the trip, we saw some of the most photographed sites on the Great Ocean Road, including the 12 Apostles, London Bridge and the Grotto.  Gorgeous and breathtaking scenery found at every stop! 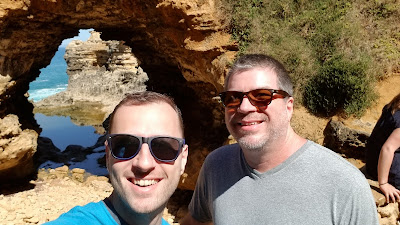 We wound down this portion of our trip and high-tailed it back to Melbourne, driving through a completely rural summer countryside the entire way back. 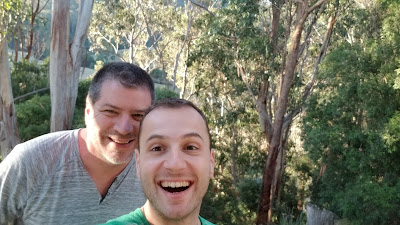 Highly recommended as one of the top road trips we've ever done!


Matt Skallerud and Richard Brower enjoy eating well and traveling more! They met while they were both an active part of the IGLTA team, and are married and now live in New York City.  Richard's talents are finding incredible flight deals from JFK to points all over the world, as well as locating the best eateries along the way. Matt is part of Pink Banana Media, Pink Banana World and the #ILoveGay network, and enjoys merging his personal and professional worlds along the way on these trips.