Serving the Art of Gay on Grandma's Dirty China 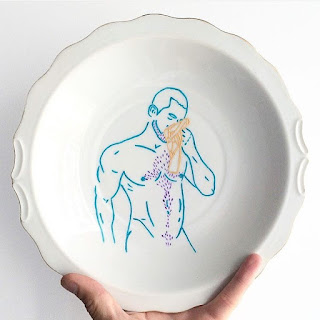 Pinky up! From a tea dance to a tea bag, and all the spilled tea in-between, the boys of PANSY ASS CERAMICS can answer it all, with a simple question. “What’s the Tea?” It’s brewed and whistling so sip or get off the pot because the duo behind HôTEL GAYTHERING present “ART GAYSEL #OBSESSED” a mélange of 18 emerging and established Gay Artists discovered (and quit literally Obsessed over) via Instagram and other social media platforms. #OBSESSED is simply the compiling of the owner’s art obsessions from iPhone to Real Life. “ART GAYSEL #OBSESSED” is free of charge and opens to the public Wednesday, December 2nd, to Sunday, December 6th, from 3 p.m. to 11 p.m. Hôtel Gaythering is located at 1409 Lincoln Road, Miami Beach. 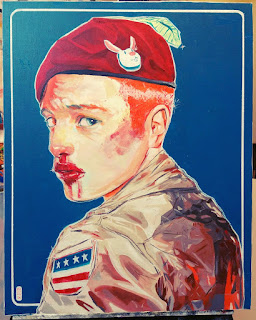 Operating on tension and fluctuating between the implication of balance and disharmony, the paintings of JULIUS DC BAUTISTA concurrently pay homage to abstract expressionism and illustration. “I see my works as a means of translation: they express and articulate moods in a code that utilize the viewer’s own method of engagement. By simultaneously communicating through bold lines and gestural texture, I can speak intricately in an organized fashion, and I can feel more succinct in my exchange of sentiments with the audience.” Paintings filled with colorful, seemingly and sometimes literally wounded figures, Bautista’s work has been harmoniously “liked” among #ARTGAYSEL followers.

Grappling between religion and sexuality, JONATHAN KENT ADAMS renders his paintings with a red heart. His focus on the floating heart is his means of communicating identity, a common theme in his Christian upbringing. Adams explains, “my thesis was the absence of structure and now I'm creating these geometric abstract environments for the figure to exist in. To me that is belief or faith. Sometimes it seems like a fact or obvious other times it seems like an illusion... I grew up going to church and that was a huge part of my life. It was my security. My safe place. I was constantly told there was no place for my queer self though. So my thesis show was about allowing the figures to exist in this white space with no structural environment.” (https://vimeo.com/121316310) 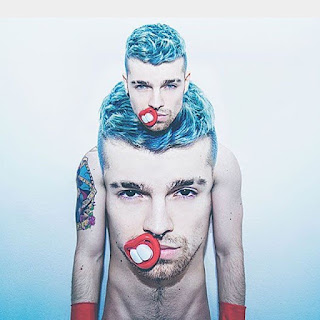 Older than sliced bread, yet extremely relevant today, Self-Portraiture has become a bit of a satirical form of art with the birth of the #SELFIE. Enter artists FREDDY KRAVE (http://frederickrave.tumblr.com) & ALEXANDER GUERRA (http://alexanderguerra.com).
These two self-portrait artists have their paws gripped on the art of the “#UNSELFIE” and more recently, on each other. “When I photograph someone else I’m aiming to capture their essence, but with self-portraits I have to dig deep inside of me every time,” says, Krave. These two recently worked together taking turns shooting each other and with each other. Guerra’s alter ego, “the RaBBiT” or “the BuNNY”, is central to his self-portrait travelogue and his own to shoot (until meeting Krave). “the RaBBiT is my release, my freedom. He allows me to be my true self, awkwardly posing between masculine and feminine idealized stances in sometimes exotic locations.” Yet, ironically masked under his hand made bunny masks, Guerra & Krave’s work both take on our culture obsession with the body from two individual perspectives.

Alexander Guerra, who is also one of the owners of Hôtel Gaythering, hand picked all of the artists at ART GAYSEL. Regarding his vision for the exhibit, Guerra explains “As an artist myself, I wanted to create a show that was central to celebrating gay artists for gay artists. Very often, seemingly erotic art is looked down and frowned upon as not being “high art”. I disagree with this notion significantly and feel as if those who feel this way are like those who castrated statues at the Vatican.” Known to his friends as a notorious hoarder, Guerra found himself hoarding digitally. He was taking countless screenshots of art and artists that he loved via instagram. “While reviewing my iPhone albums, I one day realized that I was literally obsessing over and #OBSESSED with so many of the artists. This realization is what gave birth to the idea of “ART GAYSEL #OBSESSED”.

The title “ART GAYSEL” is a “punny” way of tying in “Gaythering” with the most colorful week in Miami Beach, “Art Basel”. The show’s format is to capture the essence of the discovery via modern self-promotion using social media.

Warhol is quoted to have said "In the future, everyone will be world-famous for 15 minutes." What he couldn’t see were the 15k followers.

ABOUT HôTEL GAYTHERING
HôTEL GAYTHERING is Miami Beach’s Only Gay Hotel specifically targeted to the Gay Community and its allies, featuring 25 King Sized Guest Rooms, a Men’s Only Self-Spa & the Neighborhood Bar. Situated on the west end of the renowned Lincoln Road Mall just a few steps away from South Beach’s cafés, shops, nightlife and breathtaking beautiful white sandy beach.
Open since February 2014, Hôtel Gaythering has established itself as the Gayborhood hangout and prides itself on being the central hub for Gay Vacationers and Local’s alike. The place where guest don’t only stay but are also encouraged to play, “Gaythering” (as the locals call it) plays host to events like “TRiViA NiGHT-Wednesdays,” “Bears & Hares-Fridays,” a monthly “Craft Night” & “Gay Bingo”.

The “handsome industrial” styled decor, personalized service and inspired amenities have helped make Hôtel Gaythering a “Top 10” destination on Trip Advisor and the 2014 recipient of the “Out Traveler Award for Best Boutique Hotel or Resort.” Hôtel Gaythering guest rooms are professionally designed and furnished with king-size beds outfitted with hypoallergenic 300-thread-count linens, 40-inch HDTVs and original artwork. In addition to its unrestrained, if quirky, rooms, Hôtel Gaythering guests enjoy exclusive access to their complimentary Men’s Self Spa with its many amenities including an Aroma Steam Room, Jacuzzi, Dry Sauna and a Hamam Aroma/Mud Steam Lounge.