Gay and Lesbian Travel a booming segment at ITB Berlin 2015 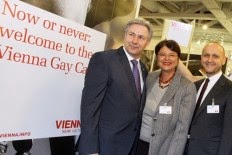 Gay and lesbian travel is one of the fastest-growing markets in the international travel industry. Ever since 2010 ITB Berlin has grouped all the relevant providers on an attractive combined display in order to focus attention on lesbian, gay, bisexual and transgender tourism (LGBT). The Gay & Lesbian Travel Pavilion in the centrally located entrance area in front of the Caribbean Hall 3.1b, now showcases the world’s largest range of LGBT tourism products at any trade fair.

Among this year’s exhibitors attending the Pink Pavilion for the first time are Mykonos Accommodation Center with gay-friendly hotels from Mykonos, the Stockholm Gay & Lesbian Network with EuroGames 2015, the Dorsett Hotel Group with hotels in Asia and the UK as well as the gay tour operator Zenith Travel from Ecuador and Servicewerk Berlin with partners from Belgium. A first time exhibitor is also the German Gay&Lesbian Travel Magazine BonVoyage. Key West, Florida Keys & Key West, Fort Lauderdale as well as Ontario with Toronto, are represented for the first time with their own LGBT stand at the world’s largest travel trade show. Wien Tourism together with the popular Vienna Gay Café and ITB LGBT partner TomOnTour/Diversity Tourism GmbH are long-standing exhibitors at the show. The stand of Vienna Tourism features a cube with a large photo of Conchita Wurst and questions about the Eurovision Song Contest which in 2015 will take place in Vienna. Those who get the right answers will be able to win prizes. Also taking part again are the Spartacus Gay Guide, Brazil with ABRAT and Embratur, Argentina Turismo LGBT, Diversity Consulting from Madrid, the Ella Festival from Majorca, Gay Gran Canaria and the IGLTA (International Gay & Lesbian Travel Association), together with World Rainbow Hotels, Gay Guide 365, Here Media, and co-exhibitors from Tel Aviv and Barcelona.

Following its successful launch last year, in 2015 the Gay & Lesbian Media Networking Brunch will be taking place on Wednesday, 4 March. From 11 a.m. to 12.30 p.m. members of the media will be able to get together in an informal atmosphere with representatives of destinations and other tourism providers. Part of it will be the Ella Festival for Women, One & Only Hotels, Toronto and Ontario, Hotel GranVia Kyoto from Japan, Spartacus and TomOnTour and, for the first time, the city of Athens (the City of Athens Convention & Visitors Bureau), which is acting as the main sponsor of the event. Another regular highlight is the reception organised by the Spartacus Gay Guide at their stand on 5 March 2015, the Thursday of ITB. Among those taking part are IGLTA, the Berlin Aids relief organisation (Berliner Aids Hilfe) and Air Berlin. Also on Thursday, night-fly agents from MANEO (a Berlin Anti-Violence-Project) will invite trade visitors to stop in hall 12 where ITB LGBT Partner visitBerlin and the Pink Pillow initiative will host a reception from 4.30 to 6.00 p.m. On the same day, Chic Outlet Shopping® will invite all IGLTA members and interested exhibitors to a midday reception at their stand in hall 18, stand 125a. On the Saturday of ITB ’Queer Tango’, a legendary event and major attraction for the public, will be taking place at 3pm on the gay and lesbian stand of Argentina. Also on Saturday, the Greek island of Mykonos will regale visitors at a 4 o’clock reception with cheese and wine. Taking place on 4 March 2015 at the Park Inn on Alexanderplatz will be the ITB Party by TomOnTour, a cult event for partygoers. Admission is by invitation only. Visit Florida with the Florida Keys & Key West, St.Petersburg / Clearwater and Fort Lauderdale are the exclusive partner of the event. On Thursday night the party will go on with the Mate Travel Awards get-together which will take place at the Tube Station in Berlin Friedrichstraße. On Friday the community will be networking with the IGLTA for an evening reception at the Axel Hotel, hosted by Tourism Toronto and Ontario. Admission here is also by invitation only. The next morning, on ITB Saturday, visitBerlin and the pink pillow Berlin collection hotels will invite guests to meet for a LGBT ITB-Breakfast in Steigenberger Hotel Am Kanzleramt.

Gay and Lesbian Tourism Panel at the ITB Berlin Convention
At the ITB Berlin Convention the ITB Destination Days will be addressing once again the topic of gay and lesbian travel. On Friday, 6 March 2015, taking the gay and lesbian market as an example, international experts Richard Gray, managing director of LGBT Market, Greater Fort Lauderdale Convention & Visitors Bureau; Shiho Ikeuchi, director of Overseas Marketing Hotel Granvia Kyoto; Kristin Hansen, of the Ella Festival, Majorca, and Rika Jean-François, responsible for CSR and LGBT travel at ITB Berlin and member of the board of IGLTA, will be debating “the potential of social media to successfully influence niche markets.” Matt Skallerud of Pink Banana Media, Los Angeles, will be holding an introductory paper. Moderating the event will be Thomas Bömkes, managing director of Diversity Tourism GmbH and long-standing advisor in LGBT matters to ITB Berlin.

ITB Berlin’s commitment to cultural diversity is not confined to the dates of the show. Thus, on request the ITB Academy organises events at various destinations with information on global developments. The show has also committed to strategic partnerships regarding the development of the LGBT travel product with Wien Tourismus and visitBerlin. In the context of its social responsibilities the world’s largest travel trade show also sees itself in a pioneering role and promotes tolerance and the implementation of human rights. ITB Berlin is a member of the IGLTA and supports the IGLTA Foundation.

About ITB Berlin's commitment to diversity and LGBT travel:
http://www.itb-berlin.com/ITBBerlin/DestinationsSegments/GayLesbianTravelLGBTTravel/

Join the ITB Press Newsroom on LinkedIn - https://www.linkedin.com/groups/Official-ITB-Newsroom-2521886/about
Become a fan of ITB Berlin at www.facebook.de/ITBBerlin.
Follow ITB Berlin on https://twitter.com/ITB_Berlin.
Get the latest updates from the Social Media Newsroom at http://newsroom.itb-berlin.de.

You can find press releases on the internet at www.itb-berlin.com under the section heading Press Service / Press Releases. Make use of our information service and subscribe to our RSS feeds.