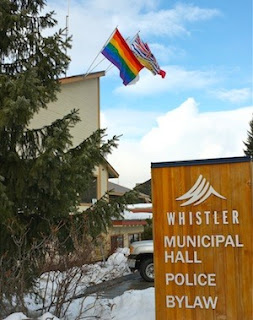 The twenty-first annual GayWhistler WinterPRIDE - Gay & Lesbian Ski/Snowboard week took place on February 3-10, 2013 and attracted visitors from around the world. Approximately three thousand gay and lesbian vacationers from 28 nations descended on the region with their friends over the eight day, sixty five events at the award winning ski resort of Whistler, BC, Canada.

This year the Resort Municipality of Whistler commissioned an economic impact study to better understand the overall value of the festival.  The report found spending made by participants, spectators and event organizers generated $9.0 million in economic activity for the Province of British Columbia.

Jobs
Spending associated with the event supported $3.1 million in wages and salaries in the Province through the support of 69 jobs, of which 52 jobs were supported in Whistler.

Tax
Considerable tax revenues were supported by the event totaling $2.1 million.
$953,000 federal
$772,000 for province of British Columbia
$332,000 for municipality of Whistler
* The economic impact assessment in 2013 was conducted by the Canadian Sport Tourism Alliance (CSTA), using the Sport Tourism Economic Assessment Model (STEAM).The 2013 study was funded by the Province of British Columbia's Resort Municipality Initiative (RMI). The Resort Municipality of Whistler (RMOW) allocated RMI funds to produce a series of economic impact analyses for events throughout the community including GayWhistler's WinterPRIDE.

The festival is Whistler's primary LGBT activation to welcome the gay and lesbian traveler to experience the dynamic and welcoming nature of the province and attracts tourism spending in British Columbia that goes beyond the week-long event. In fact, according to survey research, 31% of participants plan to visit Vancouver/Whistler two or more times outside of the WinterPRIDE week, including 52% of the out-of-province participants.
"We are very proud of the economic impact that our event has made to the province," said Dean Nelson, CEO and Executive Producer of GayWhistler's WinterPRIDE. "It demonstrates the strong buying power of the gay community and how loyal this segment is in supporting a destination that embraces diversity and makes everyone feel welcome."

Post-festival entertainment in Vancouver, encouraged participants and their friends to extend their stay pre/post Whistler vacation.  Strategic partnership with some of Vancouver's LGBT community groups and special events help to entice guests to stay a bit longer in the Province.

"The Resort Municipality of Whistler (RMOW) is committed to working with our partners to create an environment conducive to events," Said Mayor Nancy Wilhelm-Morden. "We are delighted to work with third party event producers such as GayWhistler - producers of WinerPRIDE Whistler - to attract incremental visits to the resort."

The event, which takes place annually on the first week of February, has taken one of Whistler's historically slower winter weeks and made it one of the busiest in the calendar year.  Next year, the festival will move a week sooner to the last week of January to ease some of the added pressure the new BC Family Day holiday as well as the Chinese New Years celebrations has on the resort. The twenty second-annual WinterPRIDE festival will take place on new dates of January 26th to February 2nd, 2014. For more information, visit www.gaywhistler.com

In addition to the world-class skiing and snowboarding being offered in Whistler, many of WinterPRIDE's regular highlights will return for 2014, such as an array of dance parties, culinary events, canopy tours with SuperFly Zipline and dog sledding. WinterPRIDE 2014 also offers an expanded program of on-and-off mountain events, including special events for lesbians and bears as well as the annual Mr. Gay Canada competition.

About Alpenglow Productions/GayWhistler
GayWhistler (www.gaywhistler.com) is a year-round promoter of Whistler to the gay and lesbian community, and promotes and produces the annual Gay Ski Week. 7 Night Lodging at the host hotel Aava Whistler and full week festival Packages start at just $129/person/night.  Available until August 30th, 2013 for stays from January 26 - February 2nd, 2014 available online at gayWhistler.com only.  Other packages available call 1.866.787.1966 or visit online at gayWhistler.com

About the Resort Municipality of Whistler
The Resort Municipality of Whistler (RMOW) is Whistler's local government led by an elected council and administered by an executive team and staff on behalf of 10,000 residents and two million annual visitors. The RMOW manages municipal planning and development, park and Village operations, sports facilities and recreation, public utilities and environmental services, bylaws and enforcement, fire rescue, fiscal planning and financial services, legislative services, human resources, communications and the administration of the Whistler2020 Comprehensive Sustainability Plan and Whistler's Official Community Plan.